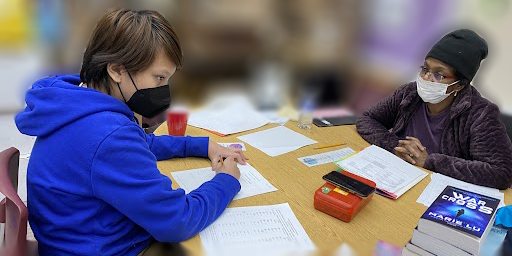 8th Grade Grizzly Shines at State Battle of the Books

Stebbins student Blaine Paje represented the Bering Strait School District to Round 2 of the 2021-22 Alaska State Battle of the Books.  Paje, competing solo against teams of up to four high school students, made it past the first round of statewide competition by besting six other teams.  Remarked his battle coach, teacher Ms. Stephanie Watkins, “Blaine is a very self-determined, competitive, brilliant young man - an unstoppable go-getter!”

Originally the Stebbins HS team was made up of Paje, fellow 8th grader, Ida Pete, and 10th grader Freda Tom.  The team did well during the district preliminaries and moved on to place first in the district.  After winning the district battles, Paje continued on alone to the state competition and qualified to the second round of the state battles.  His ‘team of one’ came in 11th out of 19 school districts from across the state.  “Not bad for a lone middle schooler competing against teams of high schoolers,” beamed his father, Bjorn Paje.

Also participating in this year’s Battle of the Books from Tukurngailnguq School was one middle school team that competed with seven other BSSD schools but did not make it to the district finals.  “It was a good year for the higher grades; Stebbins hasn’t had both middle school and high school teams participate in quite a few years,” stated the school’s librarian, “We’re looking forward to next year.”