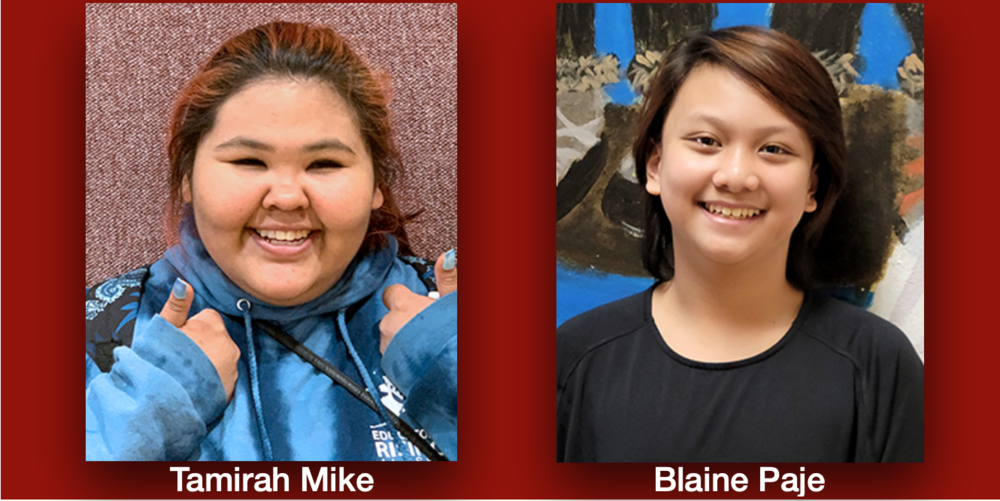 Two Tukurngailnguq School students were selected to participate in the Native Youth Olympic Games as members of the Bering Strait School District broadcast team. Tamirah Mike was invited to represent Stebbins at the district NYO games in Unalakleet; Blaine Paje was chosen to represent BSSD at the Alaska State NYO games in Anchorage.

The Alaska NYO Games celebrate Alaska Native values and culture.  At the games, advisor Jennifer Eller, BSSD’s Coordinator of Educational Technology, taught the student broadcast team to operate the cameras covering the events and monitor the screens for quality control.  The students also took photographs of the top contestants on the podium after the events.

At the games in Anchorage, Blaine Paje was charged with operating the camera for the Seal Hop event.  “I had a most interesting role because I had to go along with the flow; I had to follow them hopping.” It’s especially challenging to keep the camera steady while moving alongside the hopping student. “It was so tiring, but I had lots of fun because the shots were pretty cool."  Blaine received very good feedback from  Ms. Eller on the quality of his livestream footage.

In his first year as a student in the Bering Strait School District, Blaine has taken advantage of the opportunities that have come his way.  Many members of the BSSD broadcast team were students he had met and befriended when he went to ANSEP last November.  Seven BSSD students from the villages of Elim, Shishmaref, Stebbins, Teller, and Unalakleet made up the broadcast team.  After the NYO games, the friends had time to have some fun shopping, playing in the arcade, and going out to eat.  “It was really fun. They surprised me with a cake because it was my birthday on the 24th.”

Blaine was unable to participate on the broadcast team at the BSSD district competition in Unalakleet because he was in Anchorage competing in the Yup’ik Spelling Bee, where he placed 3rd in the state. He hadn’t planned on being at the state NYO games, but at the last minute a slot opened up when Tukurngailnguq junior Tamirah Mike was unable to go with the broadcast team to Anchorage.

Tamirah was very excited to be selected to participate on the broadcast team. She noted the opportunity to travel and meet new people as her primary motivators. She was enthusiastic about the broadcasting prospect and hoped to use her “gift for gab” for good while sharing the NYO activities live. “This is going to be my first opportunity to talk in front of the camera and to broadcast to hundreds of people.” Unfortunately, as she learned, the student broadcast team is behind the camera, not in front of it, and she did not get a chance to use her voice to air the games.  Although Tamirah is a very well-spoken student who would do well with a microphone, her plans do not include a career in broadcasting.  She plans to major in finance.

Eighth grader Blaine Paje is considering the broadcasting profession.  At the games in Anchorage, he had a chance to meet and hang out with Austin Sjong, a sports reporter from Channel 2 (KTUU) / CBS 5 (KYES) television covering NYO live.  After NYO, all the students went to the KTUU/KYES television studio and visited the newsroom.  “We got to meet the reporters. They told us how system works and how the crew helps the reporters just in case some technical problems happen.”

When asked if his experience with the BSSD broadcast team has him thinking about a career in broadcasting, Blaine answered a resounding “Yes!”  He intends to be in front of the camera conveying the news on television.